"Retard, retard" (Is that an insult?)

Is the autopilot insulting the pilots when an airplane lands? Press the play button below to listen the sound of an Airbus A320 during the round out and flare:

Here is an answer:

Whenever I'm sitting in first class on an Airbus, I hear the computer call out the altitude just before landing. I also hear it say "Retard". What exactly does that mean? I thought it must be the signal to deploy spoilers and reverse thrust.

No, it's nothing to do with the spoilers or reverse thrust. The word "retard" is a reminder to pilots to bring the thrust levers to idle during the landing maneuver, known as the "flare," just prior to touchdown. If the autothrottles are engaged, which they are most of the time on highly-automated aircraft such as the Airbus, the thrust will go to idle on its own just prior to touchdown on landing.

Here's an interesting tidbit. I noticed during my eight years on the Airbus that the fact the throttles don't move when the autothrottles are engaged drives a lot of guys nuts, but, for whatever reason, the women I flew with didn't seem to mind. This held true for me as well. It didn't bug me that the thrust levers didn't move when the thrust was changing, but many of the guys I flew with said it just didn't seem right and they found it mildly disconcerting.

By the way, there is another theory that the word "retard' is said by the airplane to pilots as an insult by a French airplane to Americans who fly it, but it's conceivable our imaginations may be a tad too active. C'est la vie!""

Here is more about autoland procedures:

(BTW: Do NOT click "Back to Table of Contents" on the bottom of that page since there is strange html code on those pages. What ever the linked page was ok.)

CAT III B Autoland
Autolanding is categorised according to the amount of automation. The CAT III C is the highest with the following meaning.
"Category III C - A precision instrument approach and landing with no decision height and no runway visual range limitations. A Category III C system is capable of using an aircraft's autopilot to land the aircraft and can also provide guidance along the runway surface.

In each case a suitably equipped aircraft and appropriately qualified crew are required. For example, Cat IIIc requires a fail-operational system, along with a Landing Pilot (LP) who holds a Cat IIIc endorsement in their logbook, Cat I does not. A head-up display which allows the pilot to perform aircraft maneuvers rather than an automatic system is considered as fail-operational. Cat I relies only on altimeter indications for decision height, whereas Cat II and Cat III approaches use radar altimeter to determine decision height.

An ILS is required to shut down upon internal detection of a fault condition as mentioned in the monitoring section. With the increasing categories, ILS equipment is required to shut down faster since higher categories require shorter response times. For example, a Cat I localizer must shutdown within 10 seconds of detecting a fault, but a Cat III localizer must shut down in less than 2 seconds." 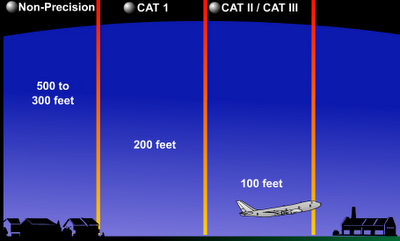 Autoland Categories
"Autopilots in modern complex aircraft are three-axis and generally divide a flight into taxi, take-off, ascent, level, descent, approach and landing phases. Autopilots exist that automate all of these flight phases except the taxiing. An autopilot-controlled landing on a runway and controlling the aircraft on rollout (i.e. keeping it on the centre of the runway) is known as a CAT IIIb landing or Autoland, available on many major airports' runways today, especially at airports subject to adverse weather phenomena such as fog. Landing, rollout and taxi control to the aircraft parking position is known as CAT IIIc. This is not used to date but may be used in the future. An autopilot is often an integral component of a Flight Management System."

Posted by Exo Cruiser at 2:45 AM No comments: