Some new wing design tools are on my new site availabe online.

Quantas new A380 got it's name from Nancy-Bird Walton, the Australian aviation pioneer.

What ever, there seems to be one advantage of a missing tail. You can't mess it with the rocket flare.

A bit more fuel and you would touch the space.

Well, that seems to be only some minor design detail... ;)

Now this seems to be a difficult question. Aircraft protection is different from car protection since there are several electrical systems that have to work before, during and after lighting.

Here are some ideas:

1. Make sure your aircraft forms a Faraday cage

In aircrafts as in cars the conducting surface is the most important protection for inside matters (people and systems). If the airfraft is made of glass fiber for example and does not have any natural conductive surface, then such a conductive layer (or arrangement) is made.

2. Make sure that nothing important is outside that cage

This is important. If you have for example some aircraft light in a plastic holder on the wing tip, it will be an invitation for the lightning to come inside the plane and destroy something. In such a case wrap the plastic holder around a copper cable and connect that to the airplane surface (to the faraday cage). Try to arrange the internal conductve parts so that there is always some surface grounded parts in front of the part that will conduct the lightning to the surface away from the lamp holder and internal wires.

3. Do not ground anything to the surface (Faraday cage)

In cars it is common to ground everything to the vehicle steel frame. Don't do that in airplanes. Opposite to that keep the parts and wires at some distant from the faraday cage as seen in the video above and the picture below. The cage works but only if the parts are not too close to it. 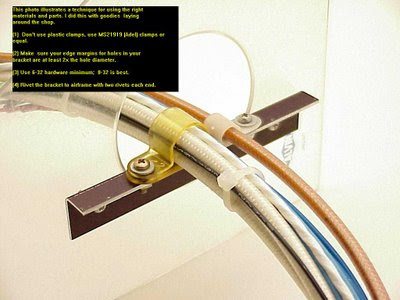 Picture: Keep distance to the surface (which will conduct the huge currents of the lightnings)

No groundings! How to arrange the groundings if one cannot be avoided. Inside the faraday cage the best is to have a single ground point that is NOT connected anywhere to the cage as in this video.

The person keeps his hand on a bar that is no conductive. This way only the shoe bottoms are grounded. Make sure there is never a ground loop anywhere. If an ground loop exists then the lighting might choose that way and it will put a huge voltage into that system destroying something.

If the system is 12V DC battery, then use for example 18 V transorbs everywhere to protect the circuits. Remember that if you have a long wires to some part then both ends and maybe even somewhere between needs to be protected.

Try to avoid thunderstorms and lightnings. The best surge is a surge that never happend.

Notice: The windows do have conductive layers so that the cage is complete. 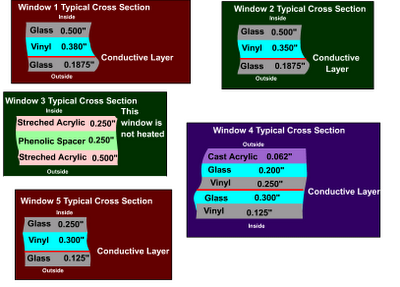 Here is a small article about lightning protection in a composite airplane.

NASA made some airborne lightning research 1980-1986. Here is a video about those tests:

At 4:42 notice how it strikes inside the cockpit to the pilot (or looks like so). 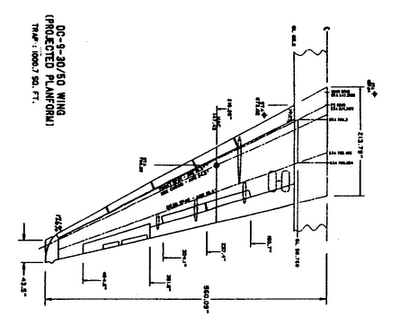 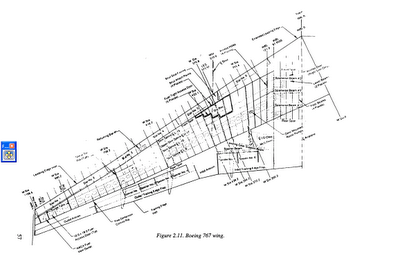 Boeing 767 wing is a nice wing design full of details. First of all the whole leading edge is provided with slats. Slats will delay the stall on all configurations and they increase the wing maximum lift. Wing tips have normal ailerons and the wing has a twist that makes the tip stall latest. That ensures full control even at stall.

Wing inboard section is filled with Fowler flaps. Above flaps there are rows of spoilers. Plane is controlled with ailerons and spoilers. Ailerons are not enough at low speeds so the spoilers are also used. Spoilers function also as air brakes.

Wing inner section (the box spar) is filled with fuel. The box spar also provides the structural strength of the wing.

The following YouTupe video clearly shows how a Boeing 747 uses all spoilers at one side when landing, the tip aileron is totally too uneffective at that situation.

Boeing 767 has also an inboard "normal" aileron, which is visible in the next YouTube video.

The famous DC-9 wing (no wing engines) which can produce CLmax = 3.0

Posted by Exo Cruiser at 5:40 PM No comments:

After reading about the elevon, flaperon and taileron I invented a new control surface: FAILERON


That was actually a joke, but after thinking a while the spoiler aileron might also be called faileron or maybe saileron would be a better word?
There is a new patent about electronic (?!) aileron (eleron?) which is very interesting, US paten number 7,028,954 by Professor Van Dam year 2006. 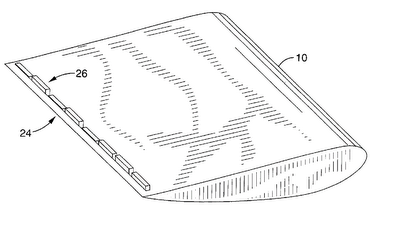 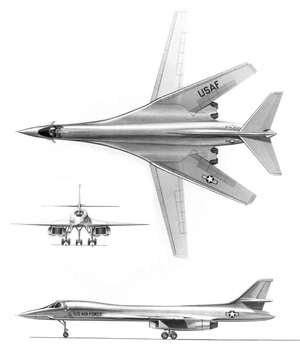 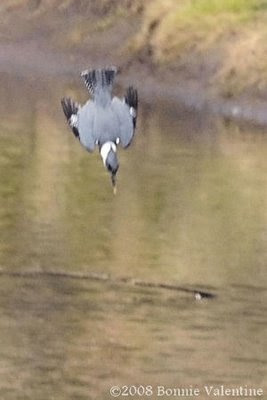 Birds know that the best wing is the least wing. If there is no need for lift, it is best to get rid of most of the wing and just dive. The shape of the bird body (fuselage) gives the least drag and the wing is only used to give lift and control.
http://www.youtube.com/watch?v=lnT2joxnkqY&feature=related

Posted by Exo Cruiser at 2:01 PM No comments:

Some links to online calculators.

To calculate Reynolds numbers and similar values at any altitude:


To check the atmosphere model at any altitude:


NOTE: I have not tested all of them, there may be bugs.
Posted by Exo Cruiser at 1:56 AM No comments: Pictures: Ice build-up on the leading edge of a wing. 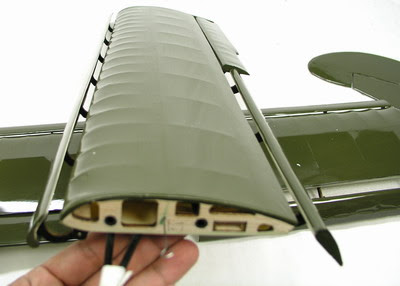 Pictures: Leading edge slats and trailing edge flaps (single and double slotted).
Which wing is the most optimal? Let's say I have to have fixed landing speed for various reasons (FAR, JAR, etc.). We set the landing speed to 61 knts for example.

Let's also say that I have the trailing edge flaps to lower landing speed (let's choose double slotted for maximum lift). In most airfoils the trailing edge is anyway turbulent, so the flap hinge line does not add any cruise drag.

Now the question is: Do I have any benefit of the NLF airfoil without leading edgen devices when I could also have the leading edge slats with not so laminar airfoil? Obviously the leading edge device destroys the flow there and I have a none laminar case.

1) With the more turbulent airfoil I get smaller wing (A1) and the L.E. device still lets me land at the desired speed (61 kts).

2) With the NLF airfoil I can not use L.E. devices to keep the laminar flow there, so I have to have a larger wing (A2) to keep the landing speed the same (61 kts).

Using the wing area calculator in the next link:

I get the following results for some small airplane (same weight 4750 lbs) and both have the same landing speed (61 kts):

I save 25 ft^2 if I use L.E. Slats. Is that smaller area enough to win the benefit of the NLF airfoil at cruise? Maybe sombody has allready done this calculation somewhere for some configuration. I have to investigate (or do it my self).

I will return to this question later (with an answer)... or send me one!

Wingman - Over The Channel 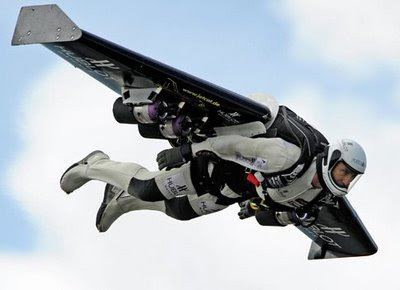 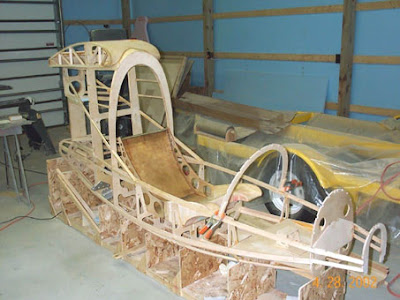 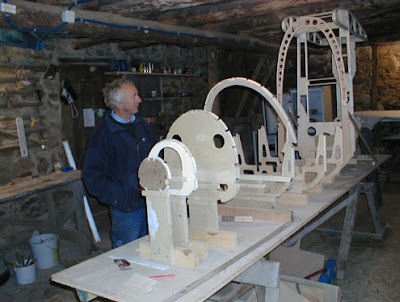 Piuma is a wooden frame UL airplane (motorized glider). It is said to be easy to build and to pilot, whose fly and comfort peculiarities were better than the "fabric and tube" ULM available in that moment on the market (1990). Costs only about 6000 € without the engine.
http://www.piumaproject.com/homeing.html
Posted by Exo Cruiser at 5:57 PM 2 comments:

LS Gliders was bought by DG Gliders few years ago. Now DG has built a new plant in Bruchsal German. It is said to be the largest and most modern glider factory in the world. 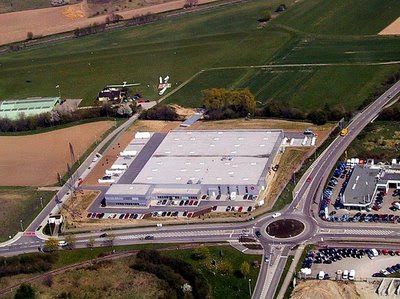 They are using glass and carbon fiber. Check the next video for inside look of the factory.

Here is the link to the DG Flugzeugbau GmbH: