Since LM operated in space and was pressurized and was imposed under heavy space radiation of different types and also temperature differences its window design is of some interest. The following text is from references /1/ /2/ and /3/.

The ascent stage was configured with three windows as shown in the following figure. 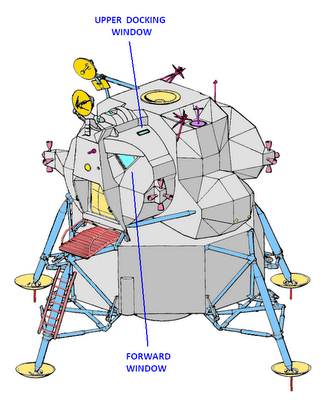 LM had small windows to save weight 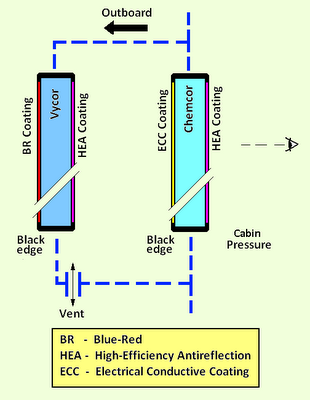 
The inner pane of each window is of chemically tempered, high-strength structural glass. It is sealed with a Raco seal (the docking window inner pane has a dual seal) and has a defog coating on the outboard surface and an antireflective coating on the inboard surface. Both panes are bolted to the window frame through retainers. All three windows are electrically heated to prevent fogging.

Two triangular windows in the front-face bulkhead of the forward cabin section provide the required visibility during the descent-, transfer-orbit, lunar-landing, lunar-stay, and rendezvous phases of the mission. Both windows have approximately 2 square feet of viewing area and are canted down and to the side to permit adequate peripheral and downward visibility. Each window consists of two panes separated from each other by a cavity that is vented to the space environment (see the following figure). 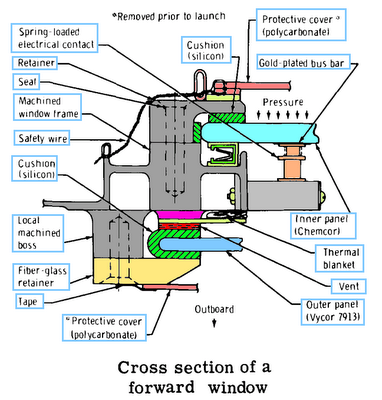 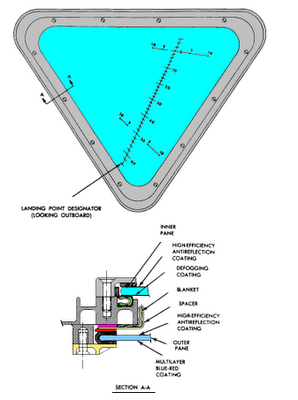 The outer non-structural pane is a micro meteoroid / radiation protective window made from annealed (Vycor) glass. The inner pane is the structural window made from tempered (Chemcor) glass. The outer window is clamped on; the inner window is a "floating" window on a seal constructed from metallic spring surrounded by a Teflon jacket. Both windows on the commander's side (left-hand side) have a landing point designator painted on them that provides the astronaut with the capability to target the desired final landing point.

An overhead docking window on the left side of the vehicle, directly over the commander's head, provides the required visibility during the final phase of the docking maneuver. The docking window has approximately 60 square inches (5 by 12 inches) of viewing area. 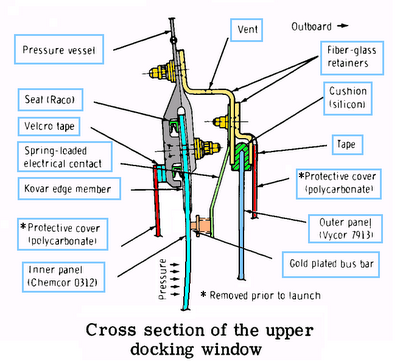 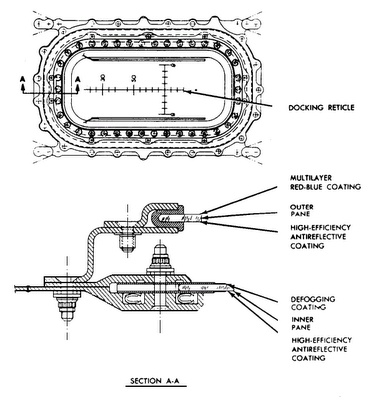 The construction of this rectangular window (see the above figure) is similar to that of the two forward windows. One exception is that the inner structural window is not a floating window; it is attached rigidly to the cabin skin by a Kovar edge member bonded to the Chemcor glass and bolted to the cabin structure. Another exception is that the window is curved to match the 92-inch diameter of the cabin skin and is not flat like the forward windows.

All three inner windows have an electrical conductive coating that is used to heat the window and to remove any moisture (fog or ice) that may accumulate during the mission. The electrical connection, which provides the required power of 115 volts ac for the forward windows and 28 volts dc for the docking window, is a spring-loaded contact against the bus bars that are integral to the glass. The original design required that the electrical wire be soldered directly to the bus bar.

VYCOR brand glass is a 96% silica glass that is ideally suited for high temperature applications. VYCOR can be used at continuous temperatures up to 900 °C. Due to its extremely low coefficient of thermal expansion VYCOR also provides excellent thermal shock resistance.

Gorilla Glass isn't a new invention. Actually, the glass, originally named "Chemcor", was developed by Corning in 1960. At that time its only practical application was for use in racing cars, where strong, lightweight glass was needed (and Apollo space vehicles).

The OmniSeal RACO 1100A Face Seal is a rugged seal, recommended for extreme static sealing conditions such as those involving cryogenic fluids, ultra high vacuum and positive sealing of light gases. The RACO seal is also used dynamically in marine loading arm swivels and similar applications where high torque and clamping forces are employed. Larger cross sections and diameters are common with this seal design. RACO™ 1100A series are available in internal or external face seal only. 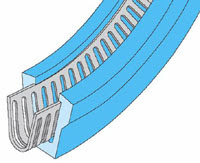 Kovar, an iron-nickel-cobalt alloy, has low thermal expansion similar to glass and is frequently used for glass-metal seals. It can bond to glass via the intermediate oxide layer of nickel(II) oxide and cobalt(II) oxide; the proportion of iron oxide is low due to its reduction with cobalt. The bond strength is highly dependent on the oxide layer thickness and character. The presence of cobalt makes the oxide layer easier to melt and dissolve in the molten glass. A grey, grey-blue or grey-brown color indicates a good seal. A metallic color indicates lack of oxide, while black color indicates overly oxidized metal, in both cases leading to a weak joint.

Kovar (trademark of Carpenter Technology Corporation) is a nickel-cobalt ferrous alloy designed to be compatible with the thermal expansion characteristics of borosilicate glass (~5×10-6 /K between 30 and 200°C, to ~10×10-6 /K at 800°C) in order to allow direct mechanical connections over a range of temperatures. It finds application in electroplated conductors entering glass envelopes of electronic parts such as vacuum tubes (valves), X-ray and microwave tubes and some lightbulbs. The name Kovar is often used as a general term for Fe-Ni alloys with these particular thermal expansion properties. Note the related particular Fe-Ni alloy Invar which exhibits minimum thermal expansion.

The LM windows had three different coatings applied to the glass (see figure).

An electrical conductive coating (ECC) was applied to the outboard surface of each inner pane. An electrical connection was made to the silver bus bar on each side of the window to provide the ECC current. The bus bars on the forward windows were powered at 45 to 76 watts to defog the panel. The inner docking window was smaller and therefore required only 18 to 24 watts to defog the panel.

The ECC was applied evenly on the docking window but unevenly on the forward window to obtain the required electrical power and thermal dissipation needed to defog the panels. The approximate thickness of the ECC was 400 to 700 angstroms for the forward window and 2500 angstroms for the docking window. The original light transmission of the chemically tempered glass before the ECC was applied was approximately 88 percent. After ECC application, light transmission was reduced to approximately 76 percent.

To increase the light transmission and decrease the reflection caused by the ECC, an HEA coating was applied to the inboard surface of each inner and outer pane. When a pane was completely coated and a black edge (black velvet paint) was applied to the periphery, the light transmission was increased to approximately 82 percent and the reflection was reduced from approximately 14 percent to 5 percent.

A final BR coating was applied to the outer surface of each outer pane to restrict the amount of infrared and ultraviolet light to the cabin. 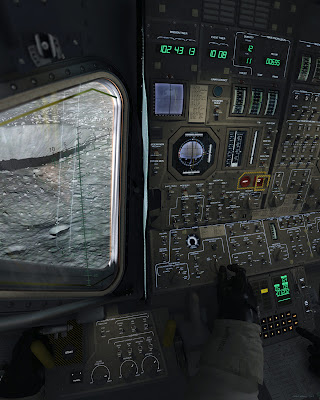 Computer reconstruction of Neil Armstrong’s view out the Lunar Module on Apollo 11, 520 feet above the lunar surface just as he transferred from automatic control to semi-manual “attitude hold” (note his hand reaching for the switch), to fly the vehicle past West crater (visible out the window) to a smooth area for landing. Note the landing point designator, the graded angles on the window that would guide Armstrong’s eye to the computers estimate of a landing spot, and the 1202 program alarm indications on the guidance computer display at lower right. (Image: http://web.mit.edu/ digitalapollo/ aboutcover.html) 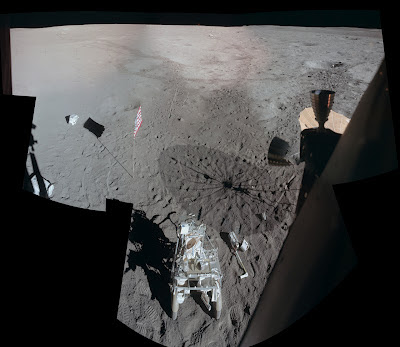 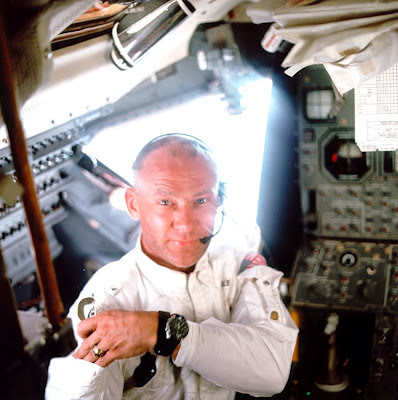 Buzz Aldrin in front of the left LM forward window