Apollo Service Module (SM) was an important part of the Apollo Command/Service Module (CSM). Nowadays also the new SM which is connected to the Orion capsule is called a service module. Actually Europeans are just now building one (2015).


James Howard "Dutch" Kindelberger was an American aviation pioneer, a leader of North American Aviation in 1934-60.

Kindelberger became the president and general manager of North American Aviation in 1934. He was promoted to chairman and chief executive officer in 1948, with Lee Atwood replacing him as president.


In 1960, Atwood took over as chief executive when Kindelberger retired. Kindelberger remained chairman of the board until his death in 1962. "Under Kindelberger's guidance, North American Aviation broke technological barriers; produced propeller- and jet-powered fighters and bombers, military trainers, rocket engines, and rocket-powered aircraft; and began its role as the prime contractor for the country's space program". Between the years 1935 and 1967, North American Aviation (under Kindelberger's direction) built more military aircraft than any other airplane maker in U.S. history.


Kindelberger and Atwood were young engineers when they met at Douglas Aircraft Company in 1930, working on the DC-1 and DC-2 transports. They left together in 1934 to join the manufacturing division of North American Aviation, where they became a unique American industrial team. An extroverted "pile-driver" of a man, Kindelberger rose to be president of the company, while Atwood, who was the quiet type became chief engineer.


When the two arrived at North American in 1934, the company had one passenger aircraft on order. Kindelberger managed to get a $1 million order for BT-9 aircraft. Then Britain asked North American to build P-40 fighters. Kindelberger told them he could make a better design, and completed the prototype of the legendary P-51 Mustang in four months; 42,000 aircraft were built by the company by the end of the war.


After World War II Atwood expected there would be a need for improved rocket engines based on those developed by the Germans for the V-2. The two decided in 1946 to invest $1 million in a rocket engine test facility in Santa Susana, California, and a supersonic wind tunnel at Los Angeles International Airport. This paid off when North American landed the contract to develop the Navaho, a rocket-boosted intercontinental cruise missile.

[During its years of operation at Santa Susana Field Laboratory widespread use occurred of highly toxic chemical additives to power over 30,000 rocket engine tests and to clean the rocket test-stands afterwards, as well as considerable nuclear research and at least four nuclear accidents, which has resulted in the SSFL becoming a seriously contaminated site and offsite pollution source requiring a sophisticated multi-agency and corporate Cleanup Project. A long process has been and is still ongoing (2007) to determine the site contamination levels and locations, cleanup standards to meet, methods to use, timelines and costs, and completion requirements - all still being defined, debated, and litigated.

The Santa Susana Field Lab Cleanup Project is a very complex challenge: technically, logistically, politically, legally, and emotionally. Regarding cleanup, the site's current owner is Boeing, with NASA and DOE liable for several parcels within that. On August 2, 2005, Pratt & Whitney purchased Boeing's Rocketdyne division, but declined to acquire SSFL as part of the sale.] /1/


Navaho allowed North American to develop expertise in rocket engines, inertial navigation systems, and supersonic aerodynamics. This in turn led to securing contracts for many advanced aerospace vehicles in the late 1950s – the X-15 manned hypersonic spaceplane, the Hound Dog missile, and the XB-70 Valkyrie triple-sonic bomber. The XB-70 required the company to develop new materials, welding, and manufacturing processes.


Kindelberger died in 1962, and Atwood became chairman of the board. Kindelberger was recently honored in a documentary by filmmaker William Winship. "Pioneers in Aviation: The Race to the Moon", which profiles four of America's legendary aerospace pioneers

whose achievements led the U.S. and the world from the era of open-cockpit biplanes to the very threshold of Space. American Public Television aired this film starting in Spring 2006. The film has previously unreleased interviews, photos, and film footage of "Dutch" (Deutsch) Kindelberger.


In 1959, North American built the first of several Little Joe boosters used to test the launch escape system for the Project Mercury spacecraft.


In 1960 the new North American CEO, Lee Atwood, decided to focus on the space program and the company became the prime contractor for the Apollo Command/Service Module. A larger Little Joe II rocket was built to test the Apollo's launch escape system, and the second stage of the Saturn V.


John Leland Atwood (October 26, 1904 - March 5, 1999) was a prominent engineer and executive in the aerospace industry. He worked as Chief Engineer and Executive at North American Aviation for over 35 years, succeeding Dutch Kindelberger as President and CEO. He developed the P-51 Mustang during World War II, the F-100 jet fighter, the X-15 rocket plane, and oversaw the Apollo program


North American Aviation won the contract to build the CSM, and also the second stage of the Saturn V launch vehicle for NASA.


However, the Apollo 1 fire in January 1967 was partly blamed on the North American company. In March, it merged with Rockwell-Standard, and the merged company became known as North American Rockwell.


In an interview August 25, 1989 Lee Atwood said: "In retrospect. I had no idea that the Apollo was going to be inflated with high-pressure oxygen. I've got some letters from various people, Walt Williams and Chris Kraft and others who pretty much acknowledge this."


Within two years the new company was studying concepts for the Space Shuttle, and won the orbiter contract in 1972. The company changed its name again to Rockwell International and named its aircraft division North American Aircraft Operations in 1973.

A cylindrical Service Module (SM) supported the Command Module, with a service propulsion engine and an RCS with propellants, and a fuel cell power generation system with liquid hydrogen and liquid oxygen reactants. A high-gain S-band antenna was used for long-distance communications on the lunar flights.


North American Aviation won the contract to build the CSM, and also the second stage of the Saturn V launch vehicle for NASA. Because the CSM design was started early before the selection of lunar orbit rendezvous, the service propulsion engine was sized to lift the CSM off of the Moon, and thus was oversized to about twice the thrust required for translunar flight.


Also, there was no provision for docking with the Lunar Module. A 1964 program definition study concluded that the initial design should be continued as Block I which would be used for early testing, while Block II, the actual lunar spacecraft, would incorporate the docking equipment and take advantage of the lessons learned in Block I development


The Service Module was an unpressurized cylindrical structure, measuring 24 feet 7 inches (7.5 m) long and 12 feet 10 inches (3.9 m) in diameter. The interior was a simple structure consisting of a central tunnel section 44 inches (1.1 m) in diameter, surrounded by six pie-shaped sectors.

The sectors were topped by a forward bulkhead and fairing, separated by six radial beams, covered on the outside by four honeycomb panels, and supported by an aft bulkhead and engine heat shield. The sectors were not all equal 60° angles, but varied according to required size.

S1. (50°) was originally unused, so it was filled with ballast to maintain the SM's center-of gravity. On the last three lunar landing (I-J class) missions, it carried the Scientific Instrument Module (SIM) which contained a package of lunar orbital sensors and a subsatellite.


S2. (70°) contained the Service Propulsion System (SPS) (see below) oxidizer sump tank, so called because it directly fed the engine and was kept continuously filled by a separate storage tank, until the latter was empty. The sump tank was a cylinder with hemispherical ends, 153.8 inches (3.91 m) high, 51 inches (1.3 m) in diameter, and contained 13,923 pounds (6,315 kg) of oxidizer.

The umbilical housing contained the main electrical and plumbing connections to the CM. The fairing externally contained


The SM remained attached to the Command Module throughout most of the mission, until being jettisoned just prior to re-entry into the Earth's atmosphere.

At jettison, the CM umbillical connections were cut using a pyrotechnic-activated guillotine assembly. Following jettison, the SM aft translation thrusters automatically fired continuously to distance it from the CM, until either the RCS fuel or the fuel cell power was depleted. The roll thrusters were also fired for five seconds to make sure it followed a different trajectory from the CM and faster break-up on re-entry.

The exhaust nozzle engine bell measured 152.82 inches (3.88 m) long and 98.48 inches (2.5 m) wide at the base. It was mounted on two gimbals to keep the thrust vector aligned with the spacecraft's center of mass during SPS firings. The combustion chamber and pressurant tanks were housed in the central tunnel.

Four clusters of four reaction control system (RCS) thrusters were installed around the upper section of the SM every 90°.


The sixteen-thruster arrangement provided rotation and translation control in all three spacecraft axes.


Each quad assembly measured 8 feet (2.4 m) by 3 feet (0.91 m) and had its own fuel tank, oxidizer tank, helium pressurant tank, and associated valves and regulators.

The Lunar Module used a similar four-quad arrangement of the identical thruster engines for its RCS.

In 1960, Clay Boyce was assigned to the Aerojet Win Apollo team and, then, became engineering manager of the Apollo Service Propulsion System (SPS) engine development. Here is his story about the AJ10-137 reliability.


// Just before the launch of the Apollo 8 mission, which took the first men out around the moon, Tom Paine was the acting administrator of NASA. He called George Mueller, who was the associate administrator for manned space flight. Paine said,

“George, are you sure that engine is going to start? Find out.”

Mueller sent a team off to study the engine. The results of his study were the reason I knew the engine would start. Mueller said,

“There have been over 3,200 starts of that engine in development and qualification. There were only four times it didn’t start, and those were all due to test stand stuff.”

The engine had started every time all through the development and qualification program. When I used to go to my little hometown in north Idaho, which was a long way from the space program, some of guys back there would ask me what I was working on. I told them, and they said,

“What if it doesn’t start?”

“It’ll start. I’ll lay it out for you. You probably start your car an average of three times a day. In a year, you’ve started it a thousand times. I’ll bet you at least once, it doesn’t go hmmmm, and, then, it’s going to grind a little. That’s one failure in a thousand.”

The specification I was working with was one failure in 5 million starts. So, I knew it was going to work as long as North American Aviation put that electrical cable on correctly. //

I have collected here some pictures and data about the Apollo era SM. 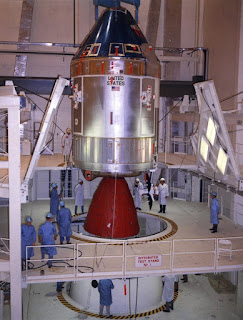 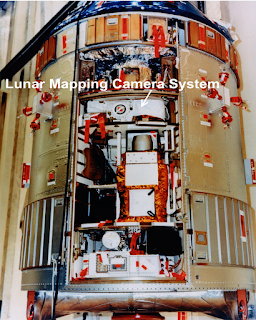 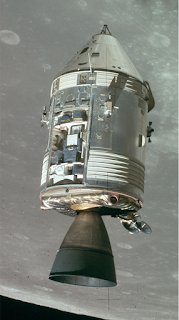 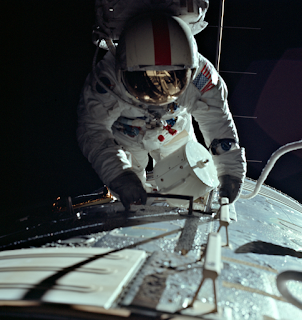 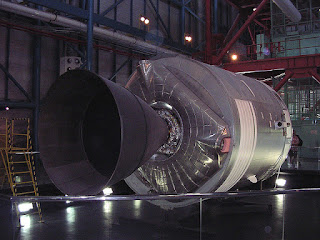 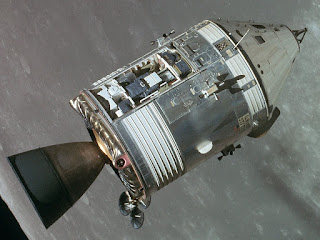 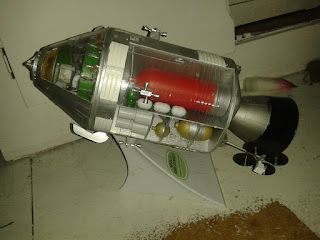 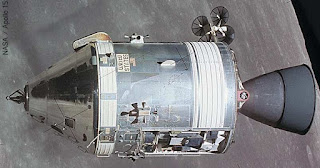 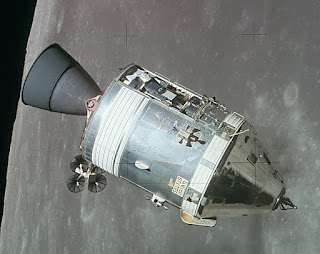 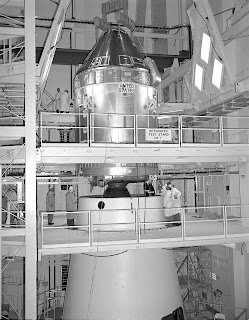 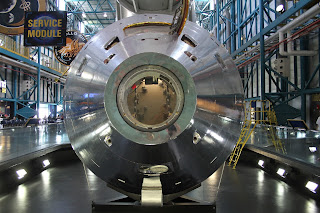 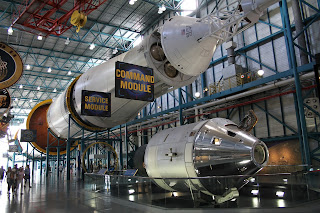 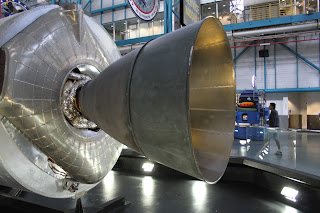 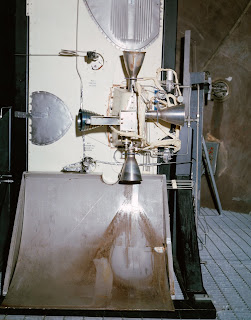 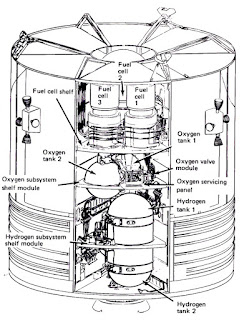 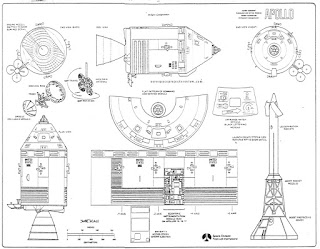 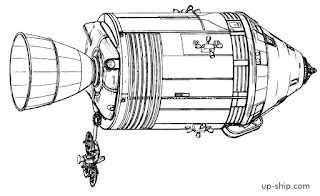 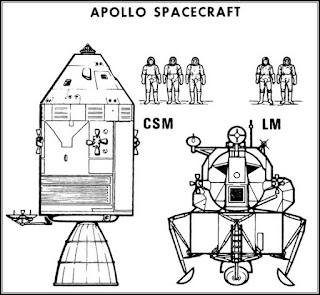 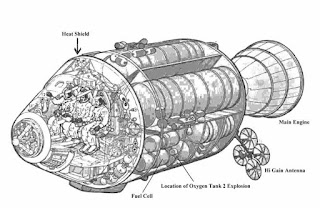 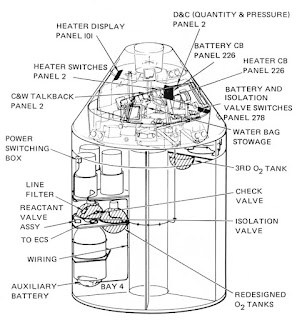 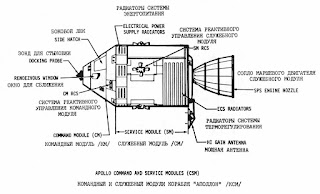