"Early in the development of the Apollo simulators, a problem arose that would have had critical consequences if not solved. The importance of the on-board computer to the guidance and navigation of a moon-bound spacecraft was obvious. Crews interacted with the computer thousands of times in a typical mission; its keyboards contained the most used switches in the spacecraft." /1/ 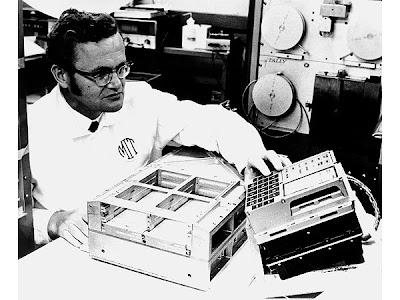 Eldon C. Hall with an Apollo Guidance Computer
"In August 1961, NASA contracted the MIT Instrumentation Laboratory (later called the Charled Stark Draper Laboratory) to develop the Apollo guidacnce, navigation and control system. Eldon C. Hall (shown above) was selected to lead the development team, and astronaut David Scott was chosen as the interface between the designers and the users." /8/ 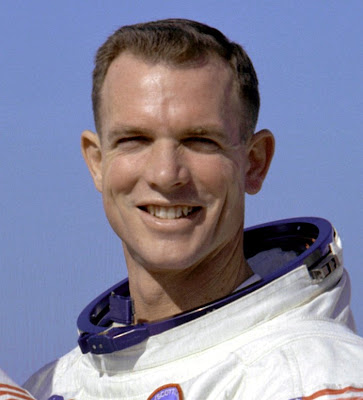 David Scott
"Between 1963 and 1969, Raytheon Corporation churned out approximately 75 rectangular chunks of metal, plastic, and silicon. Bigger than a breadbox but significantly smaller than a UNIVAC, the Apollo Guidance Computer had been designed by the MIT Instrumentation Laboratory to safely guide the Apollo astronauts and spacecraft to the Moon and back." /7/ 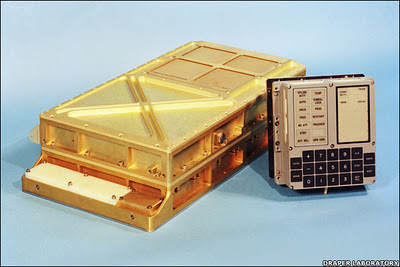 AGC and DSKY (Display and Keyboard)
"Initially, the Apollo Guidance Computer (AGC) for both the command module and the lunar module were simulated functionally, just like the rest of the spacecraft hardware. This meant that the major components of the Apollo modules existed as software in a DDP-224 rather than in their physical form in the simulator." /1/

"The Apollo Guidance Computer (AGC) provided onboard computation and control for guidance, navigation, and control of the Command Module (CM) and Lunar Module (LM) spacecraft of the Apollo program. It is notable for having been one of the first IC-based computers." /2/ 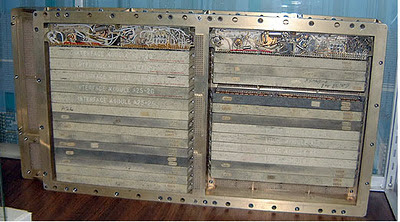 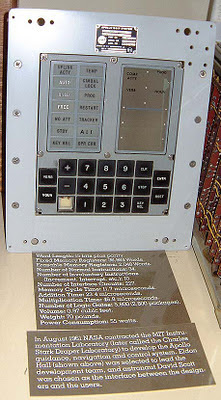 "As a result of a study and the continued concern of the Apollo Spacecraft Project Office, W. B. Goeckler of the Systems Engineering Division of the program asked James L. Raney of Computational Analysis to do a feasibility study of using a Honeywell DDP-224 to simulate the AGC. Goeckler thought it might be possible to make the Honeywell computer think it was the MIT computer and execute the MIT code, thus eliminating the need for rewriting the programs and solving the time problem." /1/ 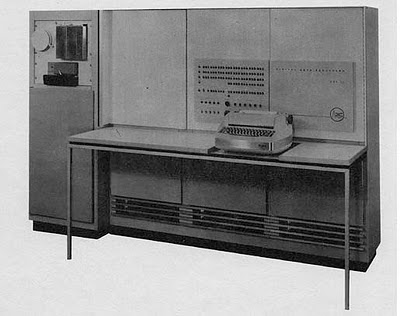 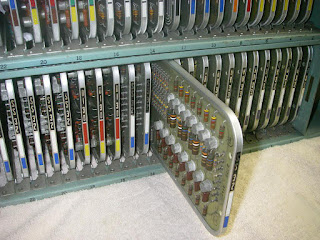 3C (Computer Control Company) card rack 1964.
"Raney suggested both hardware and software modifications to the DDP-224. He specified a switch to disable the machine's floating-point capability. Instructions were added to enable more efficient table searching and other operations that the AGC did well. To handle the different word sizes, Raney let the right-most 14 bits of the DDP word be the value of a corresponding AGC word. The left-most bit was always set to zero to indicate that it was an Apollo word, and the intervening bits matched the sign bit of the original word. Words that could not be translated (i.e., executed one for one), had to be executed by interpretive subroutines written for the purpose and stored in the lower part of the Honeywell memory. Raney figured that since the DDP had a 10-to-1 advantage in execution speed over the AGC, several instructions could be used to do one Apollo instruction without slowing down the program. He used the index registers in the Honeywell DDP to act as the Fixed Bank Register, which kept track of which core rope memory module the AGC was currently using, as well as the address of the next instruction. Finally, to store the AGC code, the flight program was put in the upper half of the 64K words of core, with the interpreter used in the AGC to execute its own instructions in an area in lower core. The contents of the AGC's 2K erasable memory and the 8K of common core addressable by all the simulator computers also was in lower core, along with Raney's interpretive subroutines24." /1/


Video of the CM Computer Human Interface
"Despite Raney's careful evaluation of the situation and proposed solution, many Apollo project personnel opposed it, simply feeling it was unworkable. In desperation, NASA approved the attempt at an interpretive simulator and bought the modified computers. In the end, the simulation within a simulation was spectacularly successful. Even though Raney and his team took care to time the subroutines so that they matched execution of the actual Apollo code, the simulated computer was faster than the real article. Following the Apollo 9 earth-orbiting mission that tested the command module and lunar module rendezvous techniques, pilot Dave Scott complained that he had up to 12 seconds less time to react when the computer signaled for a maneuver to begin. This was adjusted for later flights." /1/


Video: NASA Computers 1960's
"The sidelight in here that I want to talk about is this Software Development Laboratory. There really wasn’t such a thing in Apollo. They had the computers that did simulation mainframes, they did their assembly language assembling on big machines. The crew trainer for Apollo, you know, the simulators that the astronauts train in, actually ran an interpretively simulated Apollo guidance computer. ISAGC it was called. A fellow named Jim [James L.] Raney, who was around for a long time, I think he’s still around somewhere, created that, ended up working all the way through Station, in fact, on onboard software." (John R. "Jack" Garman) /4/

Lunar Module AGC or LGC was located at the aft of LM
"I'd become so embedded in the Station Program that they sent some of that work with me, particularly the SSE project, and that gave me the opportunity to grab a couple of other people. One of them that would be very worthwhile chatting with is Jim [James L.] Raney. Jim was the guy that built the ISAGC, the Interpretively Simulated Apollo Guidance Computer." (John R. "Jack" Garman) /4/

DSKY was located in the middle of the front section
"Developing the interpretively simulated AGC had several impacts on the program. MIT could use the simulator as a field test of its code before flight. Since MIT used tape rather than core rope to send the programs to Houston and the Cape, errors discovered could be corrected and then the corrections tested in a "real" situation. Crews could react to the way the software worked with them. Also, the simulator cost just $4.6 million, compared to an estimated $18 million for functionally simulating the programs." /1/ 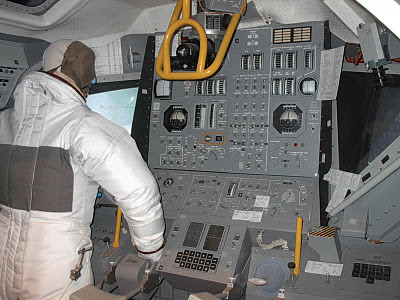 DSKY in the lower middle
"Actually, the Apollo Mission Simulators were the last of their type in that the analog environment of the spacecraft that dictated hybrid and functional simulations changed to a digital environment that lent itself to full digital simulations for the Shuttle program. Evolution to full digital simulation, including digital imaging of window scenes, meant even more dependence on digital computers. Making the Shuttle a more autonomous and thus more complex spacecraft contributed to a massive increase in the size of the computer systems needed to support simulations." /1/ 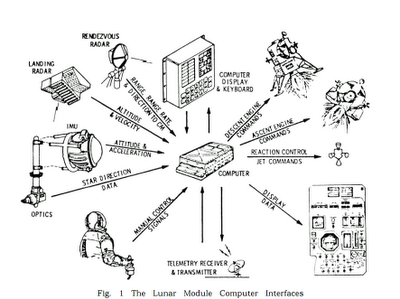 The AGC in the LM controlled almost everything simultaneously

"Shortly after liftoff of Apollo 12, two lightning bolts struck the spacecraft. The current passed through the command module and induced temporary power failure in the fuel cells supplying power to the AGC. During the incident the voltage fail circuits in the computer detected a series of power trenches and triggered several restarts. The computer withstood these without interruption of the mission programs or loss of data." /10/


Apollo 12 Struck by Lightning
"The Apollo 11 overload (1202 alarm) resulted from the rendezvous radar being set in the wrong mode during the lunar landing phase (?pilot in the loop?), waisting computer memory cycles and overloading it. The AGC operating system was responding to overloads as designed (lower priority tasks were delayed)." /10/

"The Command/Service Module simulator (CSM) consists of a generalpurpose digital computer (SDS 9300) with 32K words of memory: two analog computer consoles (Beckman 21331, interface equipment (40 A/D, 56 D/A channels) and a complement of flight hardware (real and special-purpose simulators). The heart of the flight hardware is the on-board guidance computer (CMC) which contains the programs for guidance, navigation, and control of the spacecraft. In the simulator, a real CMC is used, but the fixed memory is replaced by a core rope simulator (which operates with the CMC and has all erasable memory). This allows modification of the flight programs before they are manufactured into modules. The entire contents of the fixed memory is recorded onto magnetic tape and can be loaded into the core rope simulator in a few minutes. Individual memory locations may be altered or monitored as well. This simulator also allows control of the CMC, by providing address stop, step-by-step operation, etc." /11/ 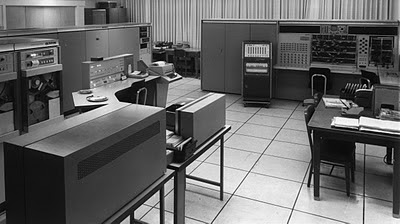 SDS 9300 digital computer and a COMCOR CI 5000 analog computer
"The inertial measurment unit (IMU) is simulated by two devices, the gimbal angle simulator and the accelerometer simulator (PIPA simulator). The gimbal angle simulator accepts three dc inputs corresponding to the three gimbal angles (which relate the inertial axes to spacecraft orientation) and by means of three servos, positions the gimbal resolvers. These resolvers are interfaced to the coupling data units (CDU), as in the flight system, which digitize the gimbal angle information for the CMC. Each CDU also has a D/A section for converting CMC output to. either 800-cps or dc voltages for use in the system, e.g. to position the SPS engine, display attitude errors, position optics, etc. The accelerometers are simulated by a special purpose device which generates pulses to the CMC as a function of the applied input voltage (dc). This device interfaces directly with the CMC." /11/ 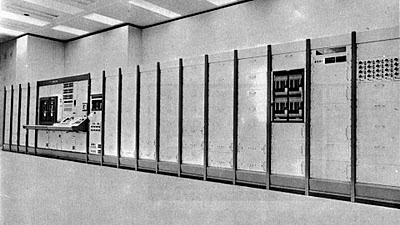 Beckman EASE 2133
"The down-telemetry output and up-telemetry input of the CMC are interfaced through special purpose devices to the SDS 9300. For down telemetry, the device converts serial data to the parallel format which is acceptable to the SDS and these data are stored for later processing. The up-telemetry is generated in the SDS and serial pulses are sent to the CMC in the appropriate format. The uplink is used to intialize the CMC prior to a simulation." /11/

"Both the flight hardware and the hybrid computer are interfaced with a cockpit mockup which contains displays and controls. Many of the discrete input signals to the CMC originate in the cockpit, e.g. mode control, attitude and translation control, etc. In addition, the lower equipment bay of the cockpit contains the optics simulators and controls which provide star fields for navigation and alignment of the TMU. These optics simulators interface with the CMC through the CDU's." /11/

"The Lunar Module (LM) simulator consists of essentially the same complement of equipment with certain other special-purpose devices added and the deletion of the optics simulator. In particular, rendezvous radar and landing radar simulators are used to generate radar data to the guidance computer (LGC) with the rendezvous radar angle data interfacing through the CDU. There is also a LM Visual Display device which projects a lunar landscape to the left window or the LM cockpit and which is driven by the SDS/Beckman computer. This device allows simulation of a manually controlled lunar landing maneuver with a realistic display of the scene as would be seen from the vehicle." /11/

Here is a link to the virtual AGC which is a modern version of the original ISAGC.

John Pultorak has constructed an AGC out of 74LS-series low-power Schottky TTL devices. Here is more about that. 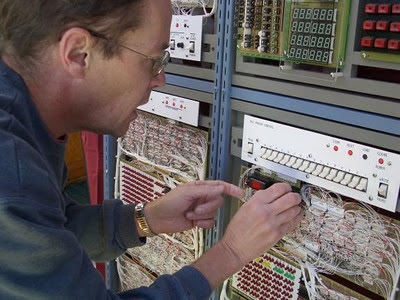 John Pultorak's AGC
There are also other AGC's running today. Here are some links.
"The AGC is the most interesting early computer because: a) it flew the first men to the moon; and b) it's the world's first integrated circuit (IC, or microchip) computer. It also has interesting architectural features." (John Pultorak)